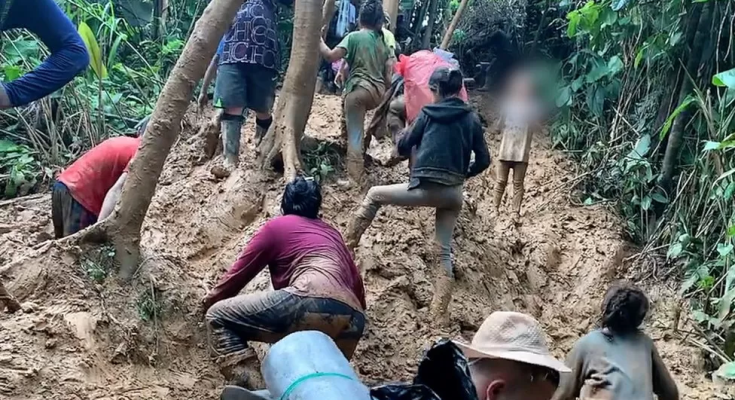 China may be easing some of its severe anti-Covid restrictions but its draconian pandemic policies have driven many citizens to seek a better future elsewhere – whatever the risks in getting there.

Three days into their trek through a Central American rainforest, some 9,300 miles (15,000 kilometres) away from home, the Sun family threw away their camping gear to lighten the load, thinking they would be out by nightfall.

Instead, they were stranded in the jungle by heavy rain.

That night, Sun Jincai, his wife and three children – aged six, nine and 11- squeezed into a small tent they found on the trail, likely discarded by other migrants, like themselves, while trying their best to ignore the cold water seeping through the thin fabric.

“Luckily none of us got sick,” said Mr Sun.

It was just one of many perilous steps on their journey from China to the US.

Mr Sun, 34, his wife and youngest child used to spend the better part of a year living on the coast of China, where jobs were abundant.

The other two children lived with their grandparents bout 400 miles away in Jiangxi, a landlocked province in China’s east, as it was hard to enrol in school outside their hometown.

But as the Chinese economy lost momentum amid tough Covid-19 restrictions and a growing tide of authoritarianism gripped the country, Mr Sun began searching for ways for the family to leave the country together.

“China is going backwards,” said Mr Sun. “My wife and I want a better future for the kids.”

The US seemed out of reach until earlier this year, when Mr Sun came across a young woman who shared details of her journey on WeChat, a Chinese messaging platform. She said she hiked through rainforests in Central America, then up north across the 2,000-mile US-Mexico border. “If she can do it, why can’t we?” Mr Sun thought.

So in August, he boarded a plane to Ecuador with his family and set out on one of the most dangerous migration routes in the world – one that more and more Chinese are taking.

Mr Sun’s journey would require a multi-day trek through the Darien Gap, a 60-mile stretch of dense, road-less rainforests connecting the north-western tip of Colombia to Central America, with waist-deep rivers to ford and steep slopes to climb.

Along the way, many migrants face attacks by armed bandits and drug cartels.

Yet, propelled by economic hardship and regional conflicts, over 200,000 people from around the world have crossed the Darien since January.

Most are from South America, with others hailing from Africa, the Caribbean and Asia.

Migrants from China remain a smaller group but their presence is growing. According to the Panamanian government, at least 1,300 people from China crossed the Darién in 2022, nearly three times more than in the previous decade. This has contributed to the record number of people eventually arriving at the US southern border.

Though a well-known route to many, the path had been virtually unknown to Chinese people until last year, when a handful of posts describing the trek began popping up on social media.

Then, when the lockdown of Shanghai began in April this year, online searches for “run”- a euphemism for emigration – skyrocketed in China. Many saw the country’s draconian pandemic policy as the driving force.

Most online discussions centred on obtaining foreign residency through education and investment. But those like the Sun family, who did not have the means to emigrate legally, are forced to take riskier journeys.

The Darien Gap route that they took is known as zouxian which roughly translates to “walking route”.

A search for zouxian returns thousands of posts on Twitter, YouTube, and Chinese apps such as Douyin and Xiaohongshu.

Some Chinese migrants formed chat groups on Telegram to bypass censorship on WeChat.

Those who had completed this journey to the US shared meticulous tips, including places to exchange money, how to avoid immigration enforcement, and how to pack light for the rainforest.

“Always be meticulous with planning your hotel bookings and return flights,” advises one traveller.

“You don’t need to pack your whole house,” says another post, with a photo of a rucksack. “If they can survive with this, so can you.”

The recent popularity of zouxian attests to the mounting desperation for some migrants to leave China, said Alexis Zhou, a freelance researcher who writes about Chinese migration in North America. Since the pandemic, it’s been very difficult for an average Chinese person to obtain a visa from Mexico or Central American countries, she said.

“Zouxian may well be the only way for them to reach the United States.”

As they set out on their trip around the world, Mr Sun, like the compatriots he had found on social media, began by documenting the journey with a photo of his family’s passports and boarding passes on Twitter.

“Finally, our family made it out,” he wrote in Chinese, “Wish me luck.”

Over the course of weeks on the road, he posted updates. His children bound down a marble staircase at Macau’s international airport. The family then made a brief stop in Taipei before flying to Thailand and from there to Turkey, where Mr Sun captured a seaport draped in the rosy glow of sunset.

They eventually landed in Quito, Ecuador – one of the only countries on the American continents that does not require a visa for Chinese visitors – where they took in the sights before embarking on the most dangerous part of the trip.

The clips take a more serious turn as the family head into the Darién Gap on a boat ride with other migrants from all over the world before sitting in a wagon drawn by a mule. From there, they headed into the roadless rainforest.

At one point a fellow migrant is seen holding the hand of Mr Sun’s six-year-old son as their group treks through muddy trails in the forest. In another, Mr Sun comforts his children after they are detained by Mexican authorities.

Watch: The Sun family’s journey through the jungle

But the most treacherous parts were often not captured by the camera. While wading through a deep river in the jungle, Mr Sun’s wife was swept off her feet by the rapid currents.

She would almost certainly have lost her life if not for three South American migrants who rushed to her rescue, Mr Sun said.

Because of the language barrier, the Chinese and the South Americans didn’t talk much, he said. “But we were all in this together.”

His family eventually made it to California, where Mr Sun found a job working in a warehouse through networks of Chinese diaspora. The whole trip from China to the US took three months, he said.

It took Wentao, 30, three weeks to pack up his life in eastern China, where he had worked odd jobs like teaching martial arts and fixing computers.

As with Mr Sun, China’s zero-Covid policy and tightening political control meant he saw no future there for himself. For fear of retribution for his family back home, he only gave his first name for this story.

Wentao said he made up his mind to leave when China abolished the presidential term limit, clearing the way for Xi Jinping to rule the country indefinitely. In October, Mr Xi secured a third term.

Under Mr Xi, Beijing has tightened control over the economy, rolling out strict regulations over the private sector. He has also instituted a hard-line Covid policy that meant some could not leave their neighbourhood or sometimes even their apartment building.

In November, protests broke out in many Chinese cities, with some calling for Mr Xi’s removal from office. Beijing responded by relaxing some of the most unpopular measures.

But many like Wentao are worried that if the authoritarian trend continues, the economic growth that has driven the country forward would no longer hold.

He wanted to start a new life in the US, but being able to do so legally would be a long shot as the pandemic and worsening political relations have caused a dramatic drop in visa issuances to Chinese nationals.

In 2021, the US rejected 79% of tourist visa applications from China.

So instead, Wentao flew from Shanghai to Europe, before catching another flight to Quito, Ecuador.

He then travelled 1,000 miles by bus and boat to reach Acandi, a Colombian town bordering Panama. From there, he trekked for seven days through the Darien jungle with three other Chinese men whom he met on the road, until they reached a jungle refugee camp with hundreds of migrants from around the world.

Wentao eventually made it to California and the whole trip cost some $8,000 (£6,575) – most of his savings. Online estimates put the average cost at anywhere between $5,000-$10,000 to pay for transport, smugglers, food and bribes to gangsters and corrupt police. Chinese migrants have claimed that they are extorted for higher fees than others because they are seen as easier targets.

A long way to a new life

Of the dozen migrants who spoke to the BBC for this story, many said that, ironically, getting out of China during the pandemic was no less difficult than the arduous trek around the world itself.

China has implemented strict border control to combat Covid, slashing international passenger flights by 97% in 2021 compared to 2019 according to government figures. Beijing has also stopped issuing passports for “non-essential reasons” under what it calls feibiyao buchuguo- a policy that prohibits people from leaving China unless “strictly necessary”.

Some migrants use dubious agencies to forge job offers or school admission letters from overseas to apply for passports, which are necessary to fly out of the country.

Although China has taken steps to loosen Covid restrictions in recent weeks, Wentao said it would not have changed his decision to leave.

“Whether zero-Covid stays in place or not, the root problems haven’t changed,” said Wentao. “In China, I don’t see hope.”

The Chinese government did not reply to the BBC’s request for comment, but has previously defended the country’s policies when questioned over the popularity of zouxian.

Wentao’s concerns were also shared by the other migrants the BBC spoke to.

Most of them would file for asylum upon arriving on US soil, often on political or religious grounds. The application process can take many years to complete due to mounting backlogs in the immigration system.

In the meantime, they wait, finding what jobs they can to make a living.

Most settled in California or New York, joining a large Chinese-speaking community for better access to jobs and legal representation.

Wentao chose Fremont, California, to be closer to his church. For $1,900, he bought a 2003 Camry that has over 170,000 miles on it and is living in a home with other migrants. From Monday to Saturday, he gets up around seven, and drives down to San Jose to work with a Chinese construction team, earning $160 a day. On Sunday mornings, he goes to church.

A fan of the hit Western TV series Yellowstone, Wentao dreams of visiting the national park one day.

“But before that, I’m going to save up and buy a new car that is capable of taking me there,” he said.