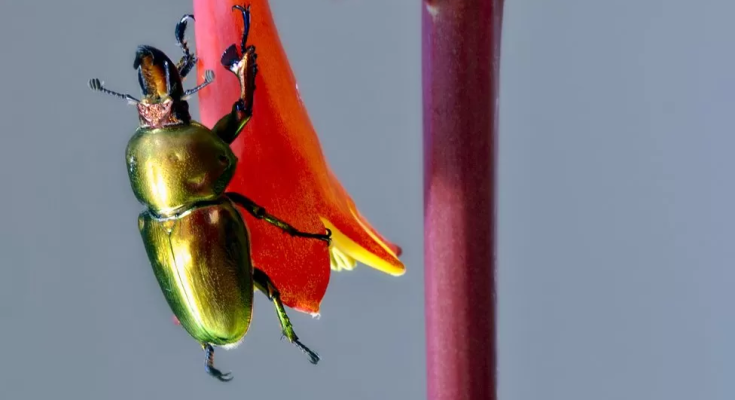 While some start the festive season to the tunes of Mariah Carey, for many Australians there is another way of knowing Christmas is on the way.

The arrival of the clumsy Christmas beetle – a brightly coloured insect that sneaks into bed sheets, crashes into windows and swarms around streetlights in summer months.

“We have in Australia this really unique… biological event where Christmas is associated with the arrival of these beautiful, glittery, friendly beetles,” Associate Professor at the University of Sydney, Dr Tanya Latty, tells the BBC.

The beetles – which don’t bite or sting, and are harmless – used to be a very common sight. In 1932, they were so prolific Queenslanders could be paid one pound to catch 200.

But now, scientists dream of seeing as many in one place. Most species of the beetle are unique to Australia – like the platypus and koala – but for many in the country, they have disappeared.

Scientists suspect this is due to habitat destruction – the insects feed off eucalyptus trees and their larvae eat native grass roots.

But the researchers hope to get clearer answers through the “Christmas beetle count project”, led by Dr Latty.

“There are lots of people who seem to remember that these beetles used to be in massive numbers, you know – 10, 20 years ago but that doesn’t seem to be happening anymore,” Dr Latty says.

The project asks Australians to upload pictures of any Christmas beetles they see this festive season to an app, to work out how many there are, and what may be contributing to their apparent decline.

“Without numbers we can’t even begin to address the conservation issues here,” Dr Batty says.

Known as “citizen-science”, Dr Latty says the input from members of public provides more information than would otherwise be available.

“Often we don’t have the resources to do the kinds of large scale surveys… so this allows us to get lots of people out there collecting data from hopefully everywhere in the country,” she says.

The insects – which belong to the scarab family, genus Anoplognathus – play an important role in the eco-system, with the larvae helping aerate soil and the beetles acting as an important food source to other animals, such as lizards and birds.

Dr Latty warns Christmas beetles may be the “canary in the coal mine” to other species’ declines.

“It really worries me that there are many other species that may be undergoing similar declines but they’re not as big and people haven’t noticed,” she says,

With the worst rate of mammal extinction in the world, Australians have been asked to pay close attention to native species in recent years.

After the Australia’s 2020 bushfires, scientists called on the public to head into fire-affected areas – where safe to do so – and upload pictures to the same app used for the Christmas beetle project.

The Australian Museum also launched an app known as FrogID, that asks members of the public to submit recordings of frog calls nationwide as populations decline. So far, more than 500,000 frog calls have been submitted.

And for those sitting on the fence about whether to get involved, Dr Latty has a simple message.

“This is sort of everyone’s opportunity to contribute to protecting biodiversity. We don’t really often have opportunities to be involved in these sorts of large-scale conservation projects…

“If it’s going to take you a minute to upload that picture but potentially have a huge conservation benefit; why wouldn’t you do it?”