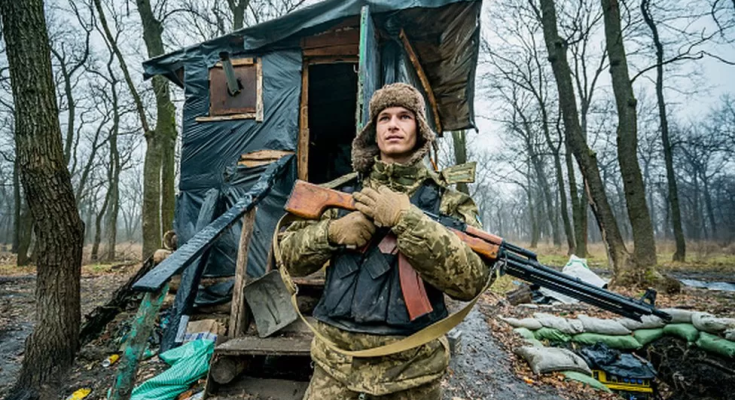 Prime Minister Rishi Sunak has asked for an assessment of the progress of the war in Ukraine, BBC Newsnight has learnt.

Senior figures fear the PM may be taking an overly cautious approach as the war enters a key phase.

One Whitehall source likened the exercise to a “Goldman Sachs dashboard” examination of the war and how UK military supplies are used.

In a tweet, Mr Sunak said the UK was with Ukraine “all the way” during a visit to the country last month, his first overseas trip as prime minister.

A Downing Street source added that it was not true that Sunak was being overly cautious and that “the UK government’s support for Ukraine is unwavering”.

But the request has raised alarm bells in some corners of Whitehall as military chiefs say weapons supplies to Ukraine may prove decisive in the winter months ahead.

The Whitehall source said: “Wars aren’t won [by dashboards]. Wars are won on instinct. At the start of this it was Boris (Johnson) sitting down and saying: ‘Let’s just go for this.’ So Rishi needs to channel his inner Boris on foreign policy though not of course on anything else.”

The source said the audit, known as a data-driven assessment, is designed to assess the progress of the war and the significance of the UK’s military contributions to Ukraine. The source said: “This is about looking at what we have put in, what we have got out.”

The UK has been one of the biggest suppliers of military aid to Ukraine since Russian President Vladimir Putin’s forces invaded the country in February.

BBC Newsnight has been told that Volodymyr Zelensky, the president of Ukraine, is aware of the debate within the UK and is encouraging Mr Sunak to maintain strong military support for his country.

“President Zelensky has sensed what is going on,” the source said. “So he has been talking to Rishi. He is trying to inspire him, saying the UK are the great liberators, the great fighters. We need you. Rise to that.”

The proposed assessment of the war comes at a crucial point in the conflict. Key figures in Whitehall believe that Ukraine and Russia have fought themselves to a standstill.

The only way, they say, for one side to pull ahead is by substantially increasing their supply of weaponry. Russia has effectively run out of supplies. Ukraine can only resupply weapons with the help of the US and the main military powers in Europe, led by the UK.

Whitehall sources say that Admiral Sir Tony Radakin, the chief of the defence staff, delivered that message in diplomatic terms in a lecture this week.

Sir Tony made clear the Russian military “cupboard is bare” and he appeared to issue a rallying cry for continued support for Ukraine.

The chief of the defence staff told the Royal United Services Institute: “Extraordinary times call for an extraordinary response. This explains why Russia is losing. And the free world is winning… Providing we maintain our cohesion and resolve, the real victory within our grasp is much more significant.”

Ukraine also made an appeal this week for more weaponry. General Valery Zaluzhny, the head of the Ukrainian armed forces, told the Economist: “I know that I can beat this enemy. But I need resources. I need 300 tanks, 600-700 ifvs [infantry fighting vehicles], 500 Howitzers.”

The US Congress gave the Pentagon approval in principle earlier this month to buy substantial weaponry for Ukraine. But the Economist reported that this may not arrive in time for a spring offensive next year.

Some in Whitehall see this approach as a sign of the innate caution on Ukraine by US President Joe Biden who is understood to be concerned about provoking a wider global conflict. There are some fears in Whitehall that Mr Sunak may end up encouraging Mr Biden’s caution.

The source told Newsnight: “We have stiffened the US resolve at all levels – pressure from us but always friendly. We don’t want Rishi to reinforce Biden’s caution. We want him to pushing in the way Boris did.”

You can watch Nicholas Watt’s full report on Newsnight at 22:30 GMT on BBC Two