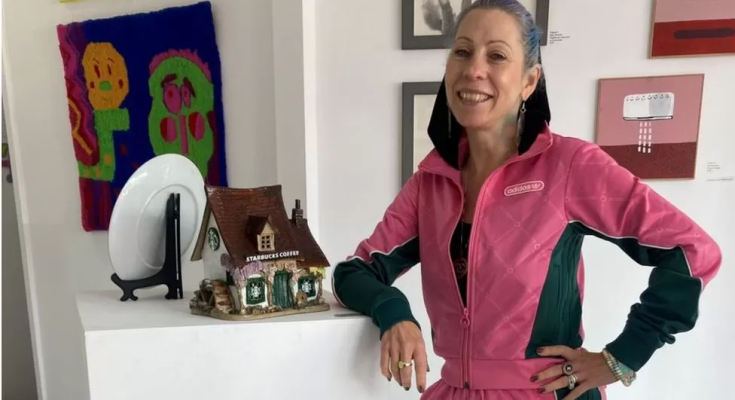 Firms have warned of the hit to Christmas sales as postal workers squeezed by rising costs fight for higher pay and better conditions.

Royal Mail workers walked out again on Wednesday, marking the third of six strike days across the festive season.

Lucy Bryant, who sells art products, uses Royal Mail for deliveries and says it’s frustrating for her and customers when they don’t arrive on time.

The warning comes as rail workers and driving examiners walk out too.

Postal worker walkouts coincide with the busiest time of year for Royal Mail when people and businesses are sending Christmas cards and presents.

Lucy Bryant, who runs her small business Haus of Lucy from Brighton, says she supports the strikers as “everyone has a right to fair pay”.

However, because she relies “so heavily on the post” to get products from suppliers and to send her art to customers, she says it “has made my life very hard this Christmas season”.

Lucy had to re-order prints that didn’t arrive at a cost to the business “that is quite a big hit for me to take,” she says.

Pip Haywood, managing director of online card company Thortful, has calculated that each day of action is costing the firm up to £50,000 a day.

“It’s meant we’ve had to staff up to protect our customers,” she told the BBC, with three times as many requests for advice on delivery windows from shoppers than usual.

With the company relying on Royal Mail for about 80% of its business, she says the strikes mean the firm will miss its sales target for the year.

Some parcel companies claim the walkouts are having a knock-on effect, and forcing them to delay next-day deliveries as people and firms seek alternative ways to send their post.

DPD Group said: “We are experiencing short delays to our next-day delivery service in a small number of locations, as a result of the industrial action at the Royal Mail, which has had a huge knock-on effect across the entire industry.”

While Yodel also said that deliveries are taking longer to some areas but did not specify why.

As well as holding strikes this week, 115,000 Royal Mail workers from the Communication Workers Union (CWU) will also take industrial action on 23 December and Christmas Eve.

The dispute has been going on since the summer and like all the industrial action across rail, the NHS, teachers, border staff and driving examiners, pay is a key issue.

A spokesman for Royal Mail said the company had made a “best and final pay offer worth up to 9% over 18 months”.

“Instead of working with us to agree on changes required to fund that offer and get pay into our posties’ pockets, the CWU has announced plans to ballot in the New Year for further strike action.”

But a spokesman for the CWU said that Royal Mail has offered workers a 3% pay rise this year, 3% next year as well as an additional 2% if employees agree to “the absolute destruction” of terms and conditions.

Many workers are seeking wage rises as the cost of living soars. The rate at which prices are rising, known as inflation, is running at nearly 11%, which remains close to a 40-year high.

On Tuesday, a separate set of figures from the ONS revealed that the gap between wage growth in the public and private sector is near a record high.

The average pay rise for workers in the private sector was 6.9% between August and October. That compares to wage growth of just 2.7% for public sector employees.

Tuesday’s walkout by rail staff left services running at about a fifth of capacity, on a day when snow, ice and fog hampered road and air travel.

Around half of rail lines are shut again on Wednesday, with no services at all in most of Scotland and Wales.

The first-ever nationwide strike by nurses is also expected to go ahead this week.

And on Friday, rail workers, buses, baggage handlers, highway workers and driving examiners will walk out.

The government’s emergency Cobra committee will hold its second meeting of the week later to discuss how to minimise the impact of the wave of industrial action.

Along with the rail industrial action on Tuesday and Wednesday, there will also be train strikes on Friday and Saturday.

This is part of a long-running dispute between unions, rail firms, the government and Network Rail over pay, job cuts and changes to terms and conditions.

But the rail industry was hit by a drop-off in passenger numbers during the Covid pandemic, and it’s under pressure to save money. Bosses say reforms need to be agreed, to afford pay increases and modernise the railway.

Network Rail wants to cut 1,900 jobs as part of changes to the way its maintenance teams work – although it insists most of this could be achieved by people leaving voluntarily.

The RMT disagrees with some of the changes and wants a guarantee of no compulsory job losses.