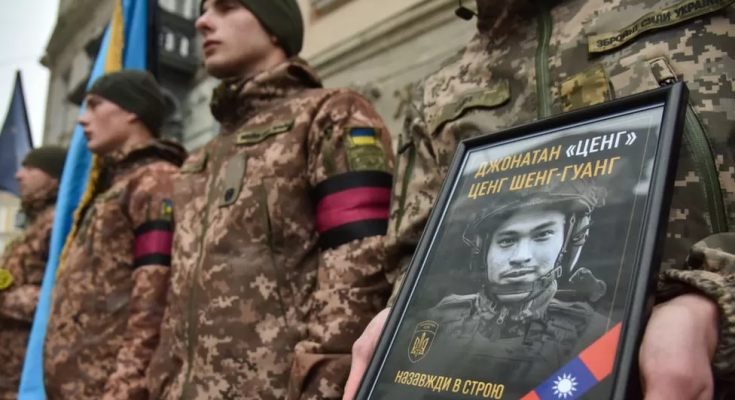 In a church in the western Ukrainian city of Lviv, Tseng Sheng-guang’s mother takes one final look at her son, laid in a casket.

She’s joined by other relatives and a number of Ukrainians wishing to pay tribute to a man who died thousands of miles from home, fighting for a country he had never visited before.

“Sheng-guang my boy, I want you to know that you were very brave,” she later says. “You will always be my baby and I’m proud of you.”

Mr Tseng was fighting with the International Legion of Ukraine’s territorial defence forces when he was killed last month in the eastern city of Lyman. He was the first Taiwanese to die fighting in Ukraine.

In a statement released after his death, Taiwan’s Ministry of Foreign Affairs said that Mr Tseng had “given his life to Ukraine’s fight for freedom”.

Thousands of foreign soldiers have travelled to Ukraine to fight and the number of Taiwanese among them is small, estimated at about 10.

But Russia’s invasion has resonated on the self-ruled island halfway around the world. China claims Taiwan as part of its territory and said it will unify it by force if necessary. Taiwan sees itself as distinct from the mainland.

Tensions in the Taiwan Strait increased sharply following the visit of US politician Nancy Pelosi in August, which infuriated Beijing. China responded with military drills around the island.

Sammy Lin, who made friends with Mr Tseng online, said Mr Tseng was worried Taiwan could one day suffer the same fate as Ukraine.

“I remember him telling his friends that he couldn’t stand by while the Ukrainian people were being abused and killed by the Russians,” he said.

Mr Tseng was “one of the most righteous people” he had come across, Mr Lin said.

Taiwan has mandatory military service, which makes those who complete it eligible to join Ukraine’s foreign legion.

Jack Yao, 28, was also among those who made the decision to go. He arrived in Ukraine three days after President Volodymyr Zelensky appealed for foreign volunteers to join Ukraine’s fight, travelling from Taipei to Poland and then towards the capital Kyiv.

“I was looking at the situation from last year, especially with the Russians taking a lot of soldiers and tanks to the border with Ukraine. Nobody believed it would happen,” he told the BBC.

“The situation with Taiwan and over there is just like us. I was thinking of what I could do to support Ukraine.”

He joined the Georgian Foreign Legion and was tasked with close-combat reconnaissance missions. When he arrived, the Russians were still attempting to take Kyiv.

“There were a lot of bomb and rocket attacks as the Russians were in Bucha,” he says, referring to the town north of the capital.

“I had one mission and I saw our guys killed in an explosion. Almost 50 metres away, the bomb exploded behind them.”

During downtime, he was able to discuss Taiwan with members of his unit.

“One guy had lived in Taiwan for two years and knew the situation. Taiwan and Ukraine are just like brothers. It’s 100% the same. They were telling me you can’t die here because you have to go back and protect your homeland,” he said.

While Mr Yao has since returned to Taiwan and his coffee business, others remain. In a recent video for a Ukrainian charity, two Taiwanese explained their motives.

“The main reason we came to Ukraine is to defend Ukrainians’ safety,” they say, while holding a Taiwan flag.

“We are also afraid that if Russia wins, China will do the same to Taiwan. So we are willing to come to Ukraine to sacrifice our lives and the freedom for the safety of the people here.”

Still, not all the Taiwanese who went to Ukraine had geopolitics on their mind. In June, Li Chenling told BBC Chinese he was there because he wanted to live a “memorable life”.

If Taiwan was invaded, he added, his willingness to fight would depend on the response from Taiwan’s government and the US.

US President Joe Biden has repeated an assertion that the US would defend Taiwan in the event of an attack by China. However Washington’s official policy is one of “strategic ambiguity” – it does not commit to defending Taiwan, but also does not rule out the option.

Last month Mr Biden said he did not believe a Chinese invasion of Taiwan was imminent. It followed a face-to-face meeting with Chinese President Xi Jinping ahead of the G20 summit in Bali.

The Taiwanese general public’s views on the likelihood of conflict are mixed, says Paul Huang from the Taiwan Public Opinion Forum.

“Interestingly, more people seem to indicate that they are not worried,” he told the BBC.

“As we have seen from Ukraine, how much people are worried about a certain event has no bearing on the likelihood of that event happening, nor does it say anything about preparedness,” he added.

However most Taiwanese did not think the island would be able to hold out against China for as long as Ukraine has against Russia, he said.

As she grieved, Mr Tseng’s mother said her son’s decision to fight alongside others for Ukraine had given her a measure of comfort.

“Knowing that, in the last moments of his life, Sheng-guang was fighting alongside a group of the bravest warriors, that they supported each other and were together in life and death, though I am pained, I find a lot of consolation,” she said.