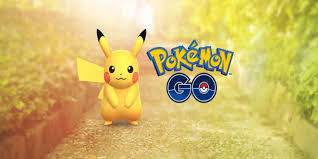 Pokemon Go Travel between the real world and the virtual world of Pokémon with Pokémon GO for iPhone and Android devices. With Pokémon GO, you’ll discover Pokémon in a whole new world your own! Pokémon GO gives you the chance to explore real locations and search far and wide for Pokémon. More and more Pokémon continue to appear around the globe, including rare and powerful Legendary Pokémon.

As you move around the places where you live and visit, your smartphone can vibrate to let you know when you’re near a Pokémon. Once you’ve encountered a Pokémon, take aim on your smartphone’s touch screen and throw a Poké Ball to catch it but be careful, or it might run away! Also look for PokéStops located at interesting places such as public art installations, historical markers, and monuments where you can collect more Poké Balls and other items.

Are you ready for an exciting challenge? You can now take on another Trainer at any time in Pokémon GO. With Trainer Battles, you can match up against another Trainer by using a Battle Code, then face off using a team of three Pokémon. When the battle is over, both participants receive great rewards, including a chance at rare Evolution items.

The fast-paced battles take place in real time, and your Pokémon can use both their Fast Attacks and Charged Attacks. Just keep an eye on your opponent’s attacks, and deploy a Protect Shield to save your Pokémon from taking critical damage. Be careful, though you only have a limited number of Protect Shields before your Pokémon will be left defenseless against big attacks.

Your opponent will usually have to be nearby for you to initiate a Trainer Battle. But you can challenge Trainers you’re Ultra Friends or Best Friends with from any distance. Good luck, Trainers!

Get connected with your real-life friends in Pokémon GO, and you can interact with them in a variety of exciting ways. After exchanging Trainer Codes, you will see your friends on your Friend List.

One way that you’ll be able to play with your friends in Pokémon GO is by giving Gifts. When you spin a Photo Disc at a PokéStop or Gym, you have a chance of collecting a special Gift. Although you can’t open these Gifts yourself, you can send them to someone on your Friend List. The Gifts contain a variety of helpful items (and occasionally special Eggs) and come with a postcard showing where the Gift was collected.

I love this game, can we make it even better?
This has been a great game since the beginning! Never before have we had a game that encouraged people to get out and meet people in the real world with the same love for Pokémon. The best part is Niantic really does care about their players and listens to the feedback given from their loyal players.

The new changes have been great keeping older players such as myself actively playing yet I’ve felt like since the beginning there has been a key element that has been missing. In the original Game Boy games when you tried to catch a Pokémon you had to fight it with one of your own Pokémon and each Pokémon had up to 3 or 4 attacks that you could pick from.

Less tapping the screen continuously and more strategizing your next move. I was reading the reviews and I agree that there needs to be a chat with your friend group so you can coordinate raids rather than using facebook chat groups.